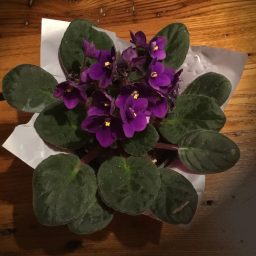 Houseplants have been going in and out of vogue ever since the early Greeks and Romans starting bringing their plants in from the outdoors. The Victorians loved their potted palms and the 70s wouldn’t have been the same without ferns and spider plants … everywhere. Current style dictates a lighter hand with the green things – sculptural stems and succulents rule the roost – but the truth is this: Houseplants should transcend trends. If you need convincing, here are some of the ways that bringing plants inside helps us out.

2. They help deter illness
Science has documented that using plants in interior spaces decreases the incidence of dry skin, colds, sore throats and dry coughs.
3. They clean the air
Extensive research by NASA discovered that both plant leaves and roots remove trace levels of toxic vapors from inside tightly sealed buildings.
The NASA researchers recommend one potted plant per 100 square feet of indoor space.
4. They boost healing
A study, conducted at Kansas State University, found that viewing plants during recovery from surgery led to significant improvements by lowering blood pressure, lowering ratings of pain, anxiety, and fatigue as compared to patients without plants in their rooms.
5. They help you work better
What? How? A number of studies with both students and workers reveals that studying or working in the presence of plants can have a pretty dramatic effect. As with simply being in nature, being around plants improves concentration, memory and productivity. Being “under the influence of plants” can increase memory retention up to 20 percent, according to a University of Michigan study.
The benefits of houseplants should make us consider them a necessity rather than an object of décor, because honestly, good health should never be out of style.